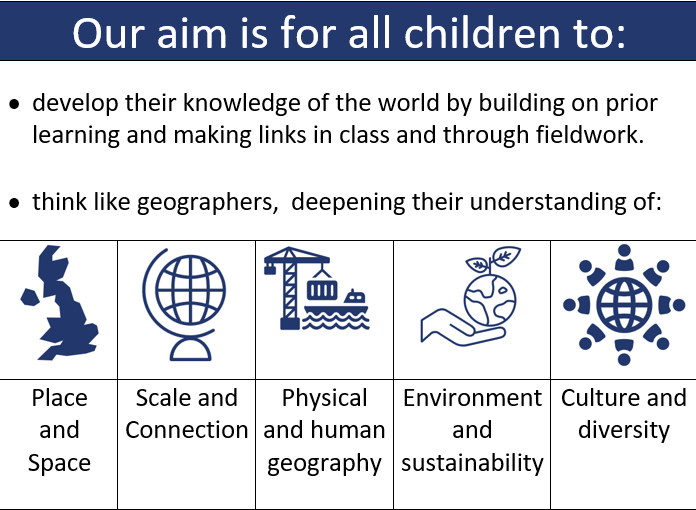 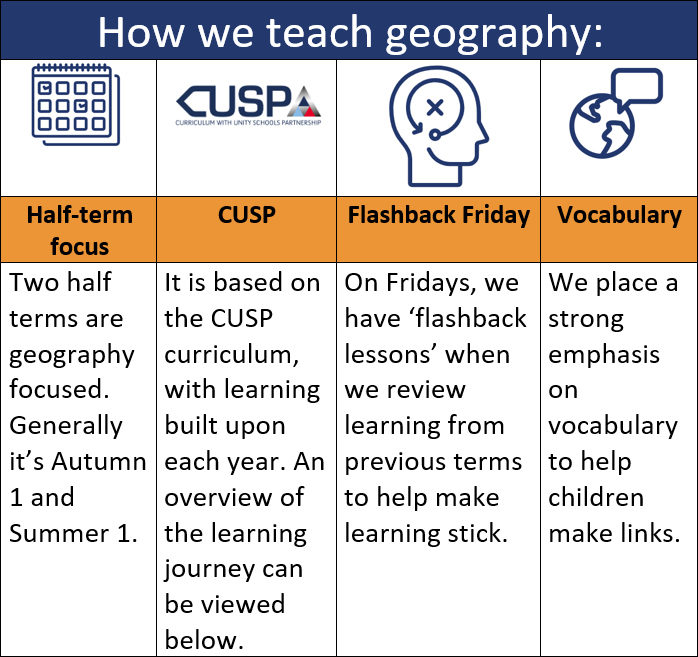 Please note that as we are moving away from a two year curriculum, some units in KS2 won't be fully synchronised until 2023-24.

The sequence in KS1 focuses young children to develop a sense of place, scale and an understanding of human and physical geographical features. Later in KS1, children learn about the purpose and use of sketch maps as well as the key features they need to include. CUSP map skills and fieldwork are essential to support children in developing an understanding of how to explain and describe a place, the people who live there, its space and scale.

Initially, children study the orientation of the world through acquiring and making locational sense of the 7 continents and 5 oceans of the world. They extend their knowledge and study the countries and capital cities of the United Kingdom, along with the oceans and seas that surround us. Further studies support retrieval; children revisit these locations with more complex and sophisticated tasks later in the school year. Enhanced provision in the classroom and use of maps, globes and atlases is essential to form coherent schemata around the big ideas that explain how we know where a place is, and how to locate it. For young children, routes and maps can be made concrete in day-to-day experiences in the safety of their school grounds and classrooms.

Throughout KS1, pupils enhance their locational knowledge by studying and identifying human and physical features of places. To deepen this understanding and transfer concepts, pupils study contrasting locations throughout the world. The location of these areas in the world are deliberately chosen to offer culturally diverse and contrasting places. Pupils study the human and physical features of a non-European location in Africa, such as Nairobi. This is also complemented by a study of an indigenous tribe in the rainforests of Brazil and Venezuela. These two studies also offer rich opportunities to know, compare and contrast different cultures in two continents using the consistent thread of human and physical features.

Fieldwork and map skills are further developed with a study of the local area, using cardinal points of a compass. Maps are introduced through familiar stories as a way to communicate what the place and space is like. Pupils retrieve and apply knowledge about human and physical features in their local context. OS maps are introduced to pupils in KS1 using Digimap for Schools. Simple keys and features are identified and mapped locally to help begin to understand place, distance and scale. CUSP Geography gives pupils the knowledge they need to develop an increasingly sophisticated understanding of place. Pupils study a variety of places – this helps them to connect different geographical concepts and gives them perspectives and opportunities to compare and contrast locations.

As pupils begin KS2, fieldwork and map skills are revisited with the intercardinal points of a compass points being introduced to elaborate on the knowledge pupils already have around cardinal points. This substantive and disciplinary knowledge is utilised to support a study of the UK, focusing on regions, counties, landmarks and topography. This study demands analysis and pattern seeking to identify the features of the UK. Further retrieval studies are designed to support conceptual fluency around physical and human features. Cause and effect are also developed through geographical reasoning. An example of this is the interrelationship between physical terrain of the northern regions of the UK and the lower lands of East Anglia, that are covered in glacial deposits.

Further studies are undertaken to elaborate fieldwork and map skills through a sharper focus on OS maps.

Pupils elaborate and expand their understanding of human and physical features and apply it to the study of rivers.

Complementing studies on location and position is the focus on the water cycle. It offers explanation and reason about physical processes as well as why certain biomes have specific features in specific global locations. Pupils study geographical patterns across the world using latitude of locations to explain why places are like they are. Further river studies revisit substantive knowledge and these are applied to the River Nile and the Amazon River as a precursor for future learning in other subjects.

Further fieldwork and map skills are introduced to enrich pupils’ disciplinary knowledge of locations and places. Cultural awareness and diversity are taught specifically within learning modules. Examples include European studies, as well as studies of countries and people in Africa, and North and South America.

A deliberately planned study focusing on the environmental regions of Europe, Russia, and North and South America draws attention to climate regions and is the precursor to studying biomes in UKS2.

The study of Biomes and Environmental regions builds upon world locations, latitude and longitude studies. World countries and major cities are located, identified and remembered through deliberate and retrieval practice, such as low stakes quizzing and Two things tasks. The study of biomes is revisited deliberately to ensure the content is remembered and applied.

In upper KS2, the study of 4 and 6 figure grid references supports prior learning of reference systems and brings an increased accuracy to mapping and fieldwork skills. Again, this knowledge is designed to be interrelated and connected to the retrieval study of biomes and environmental regions. Terrain is studied through contour lines and OS map skills and fieldwork. More advanced mapping skills using OS maps are studied and applied, with pupils using the accumulation of knowledge skilfully to analyse distribution and relationships. Route finding and decoding information through maps offers challenge through increasingly complex orienteering and mapping tasks.

Pupils take part in geographical analysis using patterns and comparison of both human and physical processes as well as the features present in chosen locations. This abstract concept is made concrete through studying and comparing the Lake District, the Tatra mountains of Poland and the Blue mountains of Jamaica. Physical processes such as orogeny and glaciation are acquired to explain significant change over long periods of time. The concept of physical process is revisited through a study of Earthquakes, mountains and volcanoes. This depth study allows pupils the opportunity to have a more sophisticated knowledge of physical processes and make connections about how the environment has been shaped, as a result.

Settlement, trade and economic activities are the focus of a study that draws upon the Windrush generation module in CUSP History. This develops an increasing knowledge about migration and the factors that push people away or draw people towards settlements. Within these studies, pupils make relational connections between settlements and physical or human features. Settlements such as ports or major world cities are studied to explain the reasons why certain places are populated and why. Disciplinary knowledge supports pupils to reason and explain the effect of change on a place, drawing on prior substantive knowledge they can retrieve and reuse.

Have a look at geography across the school by clicking on the link below: